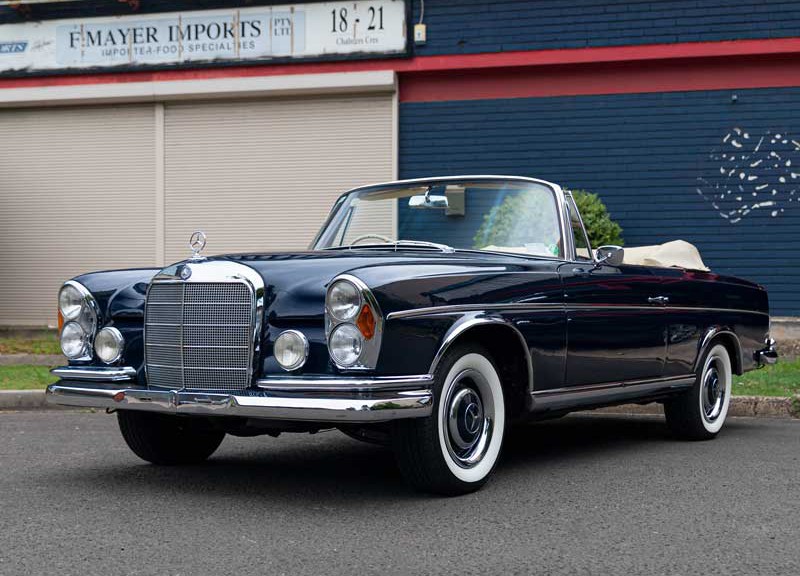 This UK delivered car is presented in Midnight Blue with contrasting cream interior.

These w111’sare focuses on luxury with a lush leather cabin, woodwork and an abundant supply of highly polished metal trim .
Featuring Automatic transmission and power steering.

The convertible was the most expensive of the W108,W109 & W111 model making it a staple of luxury and exclusivity for even the wealthy elite. stately, handsome, plush and rare makes this 300SE a solid entry in the long line of Mercedes Benz.

This car has been very well mainted since it’s arrival into Australia in 2 by the importer and current owner and has just completed a major service including the overhaul of the Air Suspension by Marque Specialist MB Spares & Service Canberra.

A truely special car and one for the purist who will appreciate the self levelling air suspension.

First registered in UK 31st December1964 and supplied to a Diplomat who transferred the car with him from Post to Post.

It Was later sold in 2004 to Walter Nieuwkoop who embarked on a restoration which was chronicled in various issues of the UK Mercedes Benz Club Gazette magazine.

Mr Nieuwkoop was awarded the ’40th Anniversary Trophy’ at The UK Mercedes BenzClub’s 2008 Christmas Dinner for the work he had put into the car.