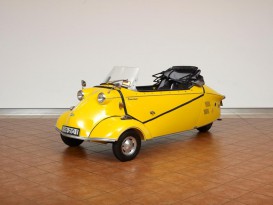 Messerschmitt customers, particularly in warmer climes, had issues with the heat-buildup inside the Plexiglas dome. The factory had always been aware of the issue, and popular accessories for protection from the sun included a suction-cup tinted panel for the inside, an adjustable exterior visor, and a white linen sunshade, which clipped onto the top frame.

The year 1957 would be a busy one for the new F.M.R. Company, because, in June 1957, during the introduction of the special KR 201 Roadster, the press could see evidence of an upcoming four-wheeled version making its rounds.

A proper solution to the bubble-top issue would be that of a fully convertible roof. Indeed the result was easily the most stylish and elegant Messerschmitt ever produced. A freestanding windshield supported by polished brackets and a multi-bow folding top frame and fabric top that had somewhat lower, more rakish lines than the bubble, gave the new roadster a sporty, svelte look that was in sharp contrast to the somewhat more utilitarian sedan version.

The Roadster was a limited-production special edition, which had, in addition to its completely demountable convertible top, numerous equipment upgrades. The interior was in black, the first time that color was used, with striking accents in a faux-snakeskin pattern, highlighted by bright red piping throughout. The interior side panels featured twin polished aluminum trim strips. The leather belt was in white, and the shift lever had a white knob. The dash panel layout followed the new 1957 specification, with a cream ashtray in place of the clock and a rearranged switchgear incorporating a new light switch. The radio opening had special white speaker cloth under its chrome wire mesh grille. The roadster body featured fender lamps and portholes, as well as new curved-arm Kontakt mirrors exclusive to this model (and later to the Tiger), which were seen on the headlight pods. New slotted hubcaps with twin-eared spinners added sparkle to the wheels. A measure of protection from the rain was provided by a set of roll-up, soft, clear, vinyl side screens, which attached by press-snaps, the front portion of which could be folded back and held open by a pair of double-sided snaps. The Roadster was finished in a new shade of bright red unique to this model, called Signal Red. In some markets, like England, this was the only color offered, but the home-market cars were available in white also.

F.M.R. was a small company able to cater to individual customer’s wishes, and deviation from standard specs, such as substituting the ashtray for a clock or changing the color, was not unusual. This car is fitted with not only the much sought-after clock, but the ultra-rare WeltFunk Autosuper AU 545 radio, with its separate tube amplifier located under the rear seat. The imitation snakeskin used on the KR 201 was a very bold, mostly black and white pattern (soon fading to brown), which repeated a 10-by-20-inch section over the entire roll. Today, this exact, bold pattern is not available, and the closest thing the restorers found that matched the original were genuine reticulated python skins, which were used throughout.

After a brief run of KR 201 Roadsters over two years, the special-trim model was discontinued, but the Roadster continued to be available on special order to the end of production. They were never identified as a 201 model on the ID plate, so late-production roadsters lacking the special trim are often referred to as 201s as well—still a matter of debate in some circles. Factory original examples of this most elegant and sporting of Messerschmitts are highly sought-after, and this is an outstanding example in every respect.

Our car is a 2 owner vehicle that spent its last 47 years prior to our ownership in the same hands, this extremely rare Messerschmitt has during the past ownership undergone a complete ground up restoration and currently shows mileage of only 1878mls and is a joy to drive and grabs attention wherever we go.

The car has been awarded with numerous trophies.